NO FOSSIL FUELS IN THE GREAT LAKES 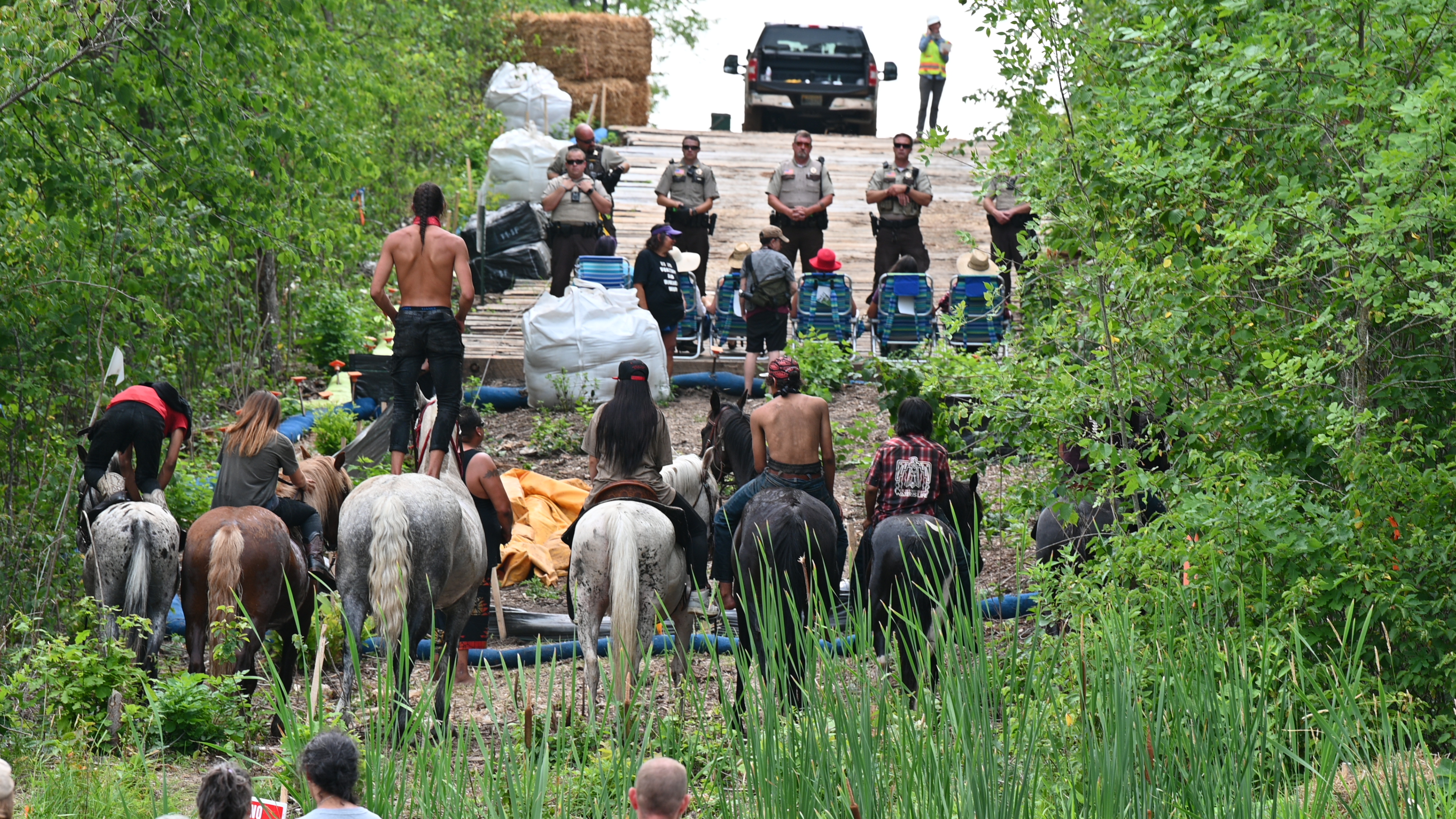 CHRONICLES: THE FIGHT TO STOP THE LINE 3

For Water. For Treaties. For Climate. THE FIGHT TO STOP THE LINE 3

The pipeline violates several treaties with the Ojibwe people that establish their right to hunt, fish, and gather along the proposed route.The pipeline would cross 200 bodies of water, including the Mississippi River twice.

If built, Line 3 would carry hundreds of thousands of barrels a day of tar sands crude oil -- some of the dirtiest oil in the world -- and would contribute the equivalent of 50 coal plants worth of carbon pollution to the atmosphere. Its carbon footprint would exceed the entire state of Minnesota’s and, like Keystone XL, would extend the economic viability of the ultra-polluting crude oil source in a way that one expert famously called “game over for the climate.” The fight against Line 3 has gone on for seven years, but took a sharp new turn when the Minnesota Pollution Control Agency (MPCA) issued water crossing permits on November 12, 2020 and the Army Corps of Engineers issued permits on November 23, 2020.

The project faces ongoing litigation over grave errors in the Public Utility Commissions Certificate of Need and other issues by Friends of the Headwaters, Sierra Club, and Honor the Earth, with the White Earth Band of Ojibwe and the Red Lake Band of Chippewa Indians, the Youth Climate Intervenors and the State of Minnesota’s own Department of Commerce

The Minnesota Department of Commerce (DOC) had joined the opposition to Line 3 before the Public Utlities Commission under the Dayton administration after their analysis calculated the social cost of climate damage at $287 billion. The DOC then joined in the lawsuit when the PUC over-ruled the recommendations of its own Adminstrative Law Judge to approve the project. Governor Walz faced legal deadlines to refile the suit at the start of his term in 2019 and again in Augst 2020, and each time, after extensive public discussion and pressure from both sides, stayed the course keeping the Commerce Department in the lawsuit. Walz said in 2019 projects like Line 3 "don't only need a building permit to forward, they also need a social permit."

Reaction to the move to build the pipeline while it is still under litigation--a hearing on key cases is expected in April--was swift. The bulk of the Minnesota Pollution Control Agency (MPCA)’s Environmental Justice Advisory Group resigned in protest over the permitting decision, saying in a letter to MPCA Commissioner Laura Bishop that “we cannot continue to legitimize and provide cover for the MPCA’s war on Black and brown people.” (Article.)

Red Lake Band of Chippewa and White Earth Band of Ojibwe and other organizations litigating against Line 3 filed a request for a stay of construction while their cases are being heard in court, but were gravely disappointed in the decision by Governor Tim Walz  to note allow the Commerce Department to join the request for a stay. Lt. Governor Peggy Flanagan, a member of the White Earth Band of Ojibwe, publicly reaffirmed her opposition to the project.

Despite this opposition, the State issued the last permits on at the end of November and the Canadian corporation Enbridge, that had been positioning pipes and equipment for years of “pre-construction”, quickly began construction transporting thousands of out-state workers into Minnesota in the midst of an increasingly dire COVID crisis. On December 2nd, Health Professionals for a Healthy Climate held a socially distanced media event and rally in front of the governor’s residence in St. Paul.

Speakers at the event said more than 4,000 Enbridge workers living and working in close quarters has the potential to develop into a super-spreader event. They said if average Minnesotans and small businesses were being asked to limit their movements and even curtail holiday celebrations and travel, “big oil” could also do its part in stopping the virus’ spread across northern Minnesota. The health professionals delivered a petition from statewide medical professionals and scientists in support of an appeal by Northern Minnesota residents and health providers, and met with the Department of Health. Later that day, Enbridge updated its COVID compliance plan in response to the critiques, though the on-paper commitments did not reassure the health providers. (Video; Press: Guardian ;Star Tribune).

Numerous Minnesota and national groups have campaigned against the pipeline including Minnesota Environmental Partnership, Minnesota Center for Environmental Advocacy and the Sierra Club Northstar Chapter. A broad range of social justice advocates and community organizations have spoken out against the project.

On Wednesday, December 9 over 1,000 people joined a digital rally to take action and support local leaders in the fight against Line 3. Many groups such as 350.org are asking the incoming Biden administration to halt the project.

On the Stop Line 3 National Day of Action, December 11,  activists in more than 60 cities with Stop the Money Pipeline visited dozens of branches of banks, asset managers and insurers who are backing Enbridge's Line 3 to deliver a letter from 40 Indigenous women leaders demanding they stop funding the tar sands pipeline that threatens the pristine waters of Minnesota and the land of the Anishinaabe.

As legal cases continue to play out, long standing grassroots resistance to the pipeline entered a new phase with public actions in multiple locations and dozens of arrests of peaceful water protectors. Native American Anishinaabe (Ojibwe) organizations have led the movement with groups like the Giniw Collective, Honor the Earth, Rise Coalition and Gitchi Gumi Scouts leading public actions along the construction route along with organizations including MN350, and Action and Northfield Against Line 3.

The Rights of Nature

On August 5, an action was filed in the Tribal Court of the White Earth Band of Ojibwe in Minnesota, by Manoomin (wild rice), the White Earth Band of Ojibwe, and several tribal members, to stop the State of Minnesota from allowing the Enbridge corporation to use five billion gallons of water for the construction of the oil pipeline known as “Line 3.”

In December 2018, the business committee of the White Earth Band of Ojibwe adopted a “rights of manoomin” tribal law, which recognized wild rice as having the rights to exist, flourish, regenerate, and evolve, as well as inherent rights to restoration, recovery, and preservation.

The rights of manoomin law is the first tribal law to recognize legal rights of a plant or animal species.

The Enbridge corporation says construction is happening along the entire route and expected to take six to nine months. Many community members along the route are fearful that thousands of construction workers pouring in from around the country might buckle stressed health care systems in the COVID epidemic and of the damage being done to precious waters and forests daily.

Pipeline opponents are hopeful about several upcoming legal appeals and the incoming Biden administration’s stated commitment to environmental justice and strong climate appointments including Gina McCarthy who signed a letter calling Line 3  “a clear danger to our climate, water, and land.”

The Walz administration faces the contradictory position of litigating against the pipeline while deploying state law enforcement to arrest water protectors. Attorney General Keith Ellison, who passionately opposed Line 3 as a Congressman and leading environmental justice advocate, represents the State Commerce Department in its lawsuit but has not taken a public position for or against completion of the project as Attorney General.

Political observers say Walz must weigh his loyalty to a pair of construction unions that helped him defeat the DFL-endorsed Gubernatorial candidate in a 2018 Primary Election against the growing power of Minnesota’s Native American voters and the importance of climate change and racial justice to the Democratic base that elected several new anti-Line 3 candidates to the legislature in 2020. (Most of the labor movement has stayed neutral on Line 3 and many larger labor unions take part in coalitions with leading progressive political groups and faith leaders and others who oppose it.)

Victory in the campaign to stop Line 3 (along with Keystone XL and a proposed pipeline in Canada) could hasten the end of the economically shaky Canadian tar sands industry within the ten years that scientists say remain to control the worst-case scenarios for climate change. (Democracy Now coverage.)

Frontline leaders and climate activists have called on supporters to join in resisting Line 3. A leading opponent of the pipeline, Winona LaDuke, executive director of Honor the Earth calls the battle over Line 3, “ground zero in the battle over climate change”. LaDuke said: “This is the last pipeline. This is the last battle, and that battle is in Minnesota …We expect thousands of people to join us.“

Friends, we are happy to announce to that Honor the Earth, with our allies filed a legal petition to the Minnesota Pollution Control Agency (PCA) on April 10, 2020, calling for contested case hearings about the agency’s water quality permits for the pipeline.