It turns out that the chemicals produced during the extraction, refining, and use of fossil fuels; high levels of benzene, toluene, and other polycyclic aromatic hydrocarbons (PAHs), and a few other bad guys are known carcinogens.    That’s why Honor the Earth is introducing the pipeline free breast campaign, as a part of Breast Cancer Awareness Month.

Now, just to be clear, we’re not the only ones on this.  Last year, Baker Hughes, who makes the enormous drill bits for the fracking industry introduced some pink drill bits for breast cancer awareness month, and donated $l00,000 for the second year in a row to Susan G. Komen, the best-funded breast cancer organization in the U.S.  In return, apparently Baker Hughes got  to use the specific shade of pink Susan G. Komen has trademarked. (Who knew they could trademark a shade of pink?) Let’s get real:  Pipelines, Fracking and the Tar Sands are Bad for your Boobs; they are bad for your health:

Researchers have known for years that the fossil fuel industry creates and releases carcinogens into the environment.  Back in the 80’s researchers at Lawrence Livermore Labs in California, found that breast cells growing in culture exposed to benzopyrene had altered genetic make-up.  Benzopyrene is the most common carcinogen in the environment that results from burning fossil fuels.

Benzene, a major chemical associated with the fossil fuel industry, is recognized as a carcinogen by the World Health Organization (WHO) and the US Environmental Protection Agency (EPA).  Benzene is known to influence the development of leukemia, breast and urinary tract cancers.  Benzene has also been linked to reduced red and white blood cell production, decreased auto-immune system, deformed spermatozoa and chromosomal mutations.

Benzene itself is known carcinogen.

Radon, an odorless radioactive gas which is found existing in bedrock has also been linked to cancer and the fossil fuel industry.  Exposure to radon is the second largest cause of lung cancer in the US, and new studies have linked fracking to increased radon exposure.  Radon can be released into groundwater and the air by the fracking process.  Radon also travels with the fracked oil and gas through the pipelines to refineries and to the point of use, exposing communities along the way.

Communities around the Alberta tar sands fields have been suffering from dangerously high levels of PAHs in the environment and have been reporting subsequently high rates of rare cancers and other diseases.

“More women in the community are contracting lupus. Infant asthma rates have also increased. During the summer months, it is not uncommon to find mysterious lesions and sores after swimming in Lake Athabasca. “When you look at what is happening in the area, it can’t not be related to development,” says Eriel Deranger, a spokesperson for the Athabasca Chipewyan First Nation. ‘Too many times, we see things in the animals and health that the elders have never seen before.’”

Spills and accidents can also expose communities to PAHs.  After the 2010 BP/Deepwater Horizon spill, scientists found PAH levels to be 40 times higher than background levels. Fisherman also reported mutations and tumors on local shrimp and crabs.  Scientists from several disciplines and universities cite PAHs as most likely cause.

The effects of these chemicals on humans and the environment should be a major concern of American lawmakers.  Will we begin to see a sharp rise in rare cancers in oil producing and refining communities?  Transportation corridor communities are also at risk.  North Dakota had over 300 oil spills reported as of 2012, but the self reporting of oil and pipeline companies, including Enbridge ( with 800 spills in a decade) is in fact a risk to your breasts, and your health..  For sure, the l7,000 miles of pipeline in North Dakota  as well as nearly l0,000 miles of pipeline in Minnesota, pose some risks.

The EPA is finally taking notice of the vast amount of toxins being emitted by the oil refining process, recently passing tough new restrictions on emissions. In 2012, Marathon Oil completed a $2.2 billion upgrade on their  8l year old Detroit facility to process tar sands oil.  Marathon’s expansion promises to create 135 jobs and generate millions of dollars in tax revenues. Even more important, Marathon says, it will help ensure that Michigan's only oil refinery will operate well into the future.

“…A reporter asked me what tar sands smell like, and it smells like death. And that’s what it is…”  Emma Lockridge

The Marathon oil refinery is in Boynton, Michigan; zip code  48217. It is known as Michigan’s most polluted zip code.

“ … We have a tar sands refinery in our community and it is just horrific. We are sick community.” Emma Lockridge explains.  We have tried to get them to buy us out. They keep poisoning us. And we cannot get them to buy our houses.  “ I can’t hardly breathe here.   I have had kidney failure. Neighbor died on dialysis, Neighbor next door with dialysis. Neighbor across the street has kidney failure. The chemicals in our pipelines and are in our water will be the same chemicals that come through your land and can break and contaminate. We have cancer, we have autoimmune illnesses, we have MS, we have chemicals that have come up into our homes through the sewer.  Those are from the companies, they end up in the public water and sewer system...They are poisoning us.”  Emma Lockbridge Models for the campaign continue to come forward. Jane Kleeb, Executive Director of Bold Nebraska, a lead organization fighting the Keystone XL Pipeline joined for a picture, noting” I’m standing up against Keystone XL because of the risks to our water and our health. The oil and gas industry denies the link of their risky product and cancer, just like the tobacco companies did years ago. Today, we stand up for women’s health." Kandi Mossett, of the Indigenous Environmental Network posed with two logos; Mossett is from the Ft. Berthold reservation, where radioactive and salt spills, as well as radioactive fracking socks litter sections of the reservation. Supporting groups include VDay, Indigenous Women’s Network, and Babes Against Biotech. Other women are encouraged to join, and the materials can be downloaded off the Honor the Earth web site.

Join Honor the Earth for this  campaign.  Fossil Fuels are bad for your breasts.  And, a fossil fuel free future is healthy for all women, children, men and Mother Earth.

Honor the Earth would like to feature your awareness and participation, please submit your profile photo holding the Breast Cancer Awareness "Pipeline Free," sticker or poster via email: [email protected].

Please include your name, location and quote why it is important to you. We will upload into Flickr and Pinterest to create a gallery to easily share with your web communities of beautiful women raising awareness by making a statement for fossil fuel free future is healthy for all women, children, men and Mother Earth. 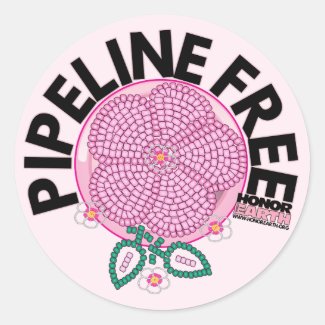 Add the "Pipeline Free," Breast Cancer Awareness Profile-PicBadge to your Twitter or Facebook profile. Here is the link: http://www.picbadges.com/t/jddCoc7j